Igor
In my original sketch for the Megaprocessor I was guessing that there would be a frame for controlling the processor. I had a dream of big levers, dials, knife switches etc., and one or two of those big sparky things. I called this frame Igor after the professors loyal assistant. And there would also be a frame for some peripherals such as I/O, timers and interrupts.

When it later came to actually designing them my ideas changed somewhat...
Firstly whilst the design of the peripherals is much much simpler than that of the processor it turns out that its size, if built in discrete transistors, is not proportionately smaller. It could well take two or three frames rather than just one. And I was running out of space. So I decided that I couldn't/wouldn't build them from discrete components but use some more sensible technology. And if you use an FPGA then it takes no space at all.
Secondly my vision for Igor faded away. It turned out there really wasn't very much for him to do. One lever (for clock speed) and just one big switch for reset. I think I originally thought there would be a lot of status information coming out of the processor which would need to be displayed. But there wasn't.
I had also decided by about this time that as well as the 256B of RAM I'd build from discrete components it would also be nice to have  a larger chunk so I could run some more interesting programs. And if I had this it would also make life a lot nicer if I could download programs into it from the outside world.

The Igor board was born to mop up all of these functions : 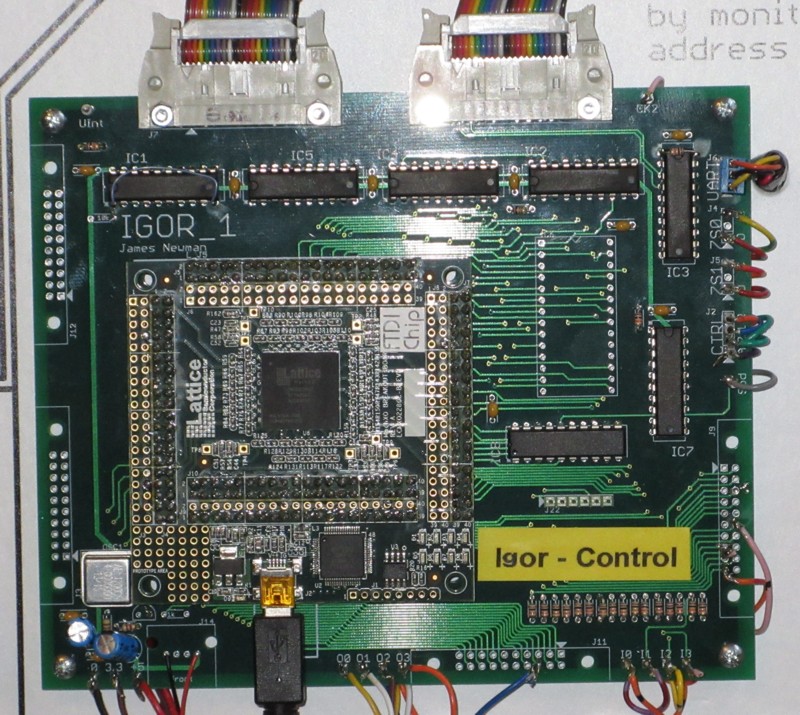 This was built around an FPGA development board from Lattice. The chips around the edge of the board provide voltage level translation (the FPGA is a 3V device, whilst the Megaprocessor is 5V). IC8 is a PIC  processor which I use to provide a bit of intelligence (e.g. working out dividers and decimal display values for the clock) and a UART. It talks to the FPGA over SPI.

I was originally intending to have just the one built and have it do everything. However when it came to designing the frame and working out how to draw what was happening a single board with "magic happens here" didn't seem very satisfactory. Also as the minimum order for PCBs is 3 I had three of the boards (actually 4, they sent me a bonus one) to hand so I decided to split out the functions to : control, RAM, peripherals.

When starting to write the code for the Igor which would look after just the clock and reset I had a further idea. If the board was not acting as a peripheral for the processor then it could monitor it instead. In particular it could sniff the address bus and halt the clock when it saw a specified value. i.e. it gave me breakpoints. It meant I had to change the direction of some of the interfaces so that they all pointed in. You can see one of the little blue wires changing control signals on IC1 at top left.

As a further development  I wrote a VHDL version of the Megaprocessor which could run in the FPGA.
I put one instance running in the control Igor. This was fed the data sniffed from processor read data bus and given the same control signals as the megaprocessor itself. It should therefore behave in exactly the same way generating the same address and write data requests. Checking these meant that I had two different versions of the Megaprocessor that should run in lockstep with each other and so gives me a powerful test and debug tool. If ever the two versions diverge the clock is instantly stopped and I can examine the processor(s) frozen at the point of error.

During integration I was able to take advantage of that bonus fourth Igor. By completely reversing the direction of all the interfaces (that was a bit ugly) and running just the VHDL version of the Megaprocessor in the FPGA it emulate a Megaprocessor and use that for testing the control frame.

Igor's been an invaluable assistant.

Would still have liked one of those spark ladders though. Something like this one.